What do babies and fish have in common? 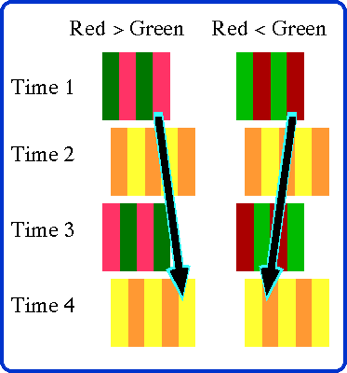 Fishes and babies can neither read nor speak, yet we persuaded them to tell us what colors they see. We showed them special moving colored patterns on a computer screen. If they saw the colors, the babies followed the movement with their eyes, and the fishes followed it by moving their whole bodies, swimming after the patterns in an innate optomotor response.

We titrated red against green luminance until, at equiluminance, perceived motion disappeared for adult obsesrvers, babies stopped making pursuit eye movements, and fishes stopped swimming in circles. Red-deficient observers rquire more red to make an equiluminous mathc, and green-deficients require more green. We were able to identify individual color-defective babies. Conclusions: Outputs from cones into the luminance pathways were in place within the first months of life. Also, guppy fish are more green-sensitive and less red-senstivie than humans.