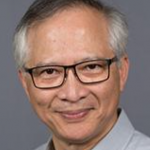 Middle row: But a black/white flickering cross looks almost black on a white surround, and almost white on a black surround.
Reason: The visual system selects the phase that has the higher contrast on the surround, and ignores the other phase.
Bottom row:  Two bottom crosses are identical, flickering between red & yellow. Black surround emphasises the light yellow, and white surround emphasises the dark red, so the two crosses look different colors.

The background flickers between light green and dark blue in both halves.  But white bars emphasis the dark blue, while black bars emphasise the light green.  Bars do not induce any colors since they themselves are achromatic.  But they select the background color that is more salient, i.e. has the higher luminance contrast.

Note: The afterimages in both halves are an identical pink color, so afterimages simply depend upon total chromatic stimulation with no salience-based selection.